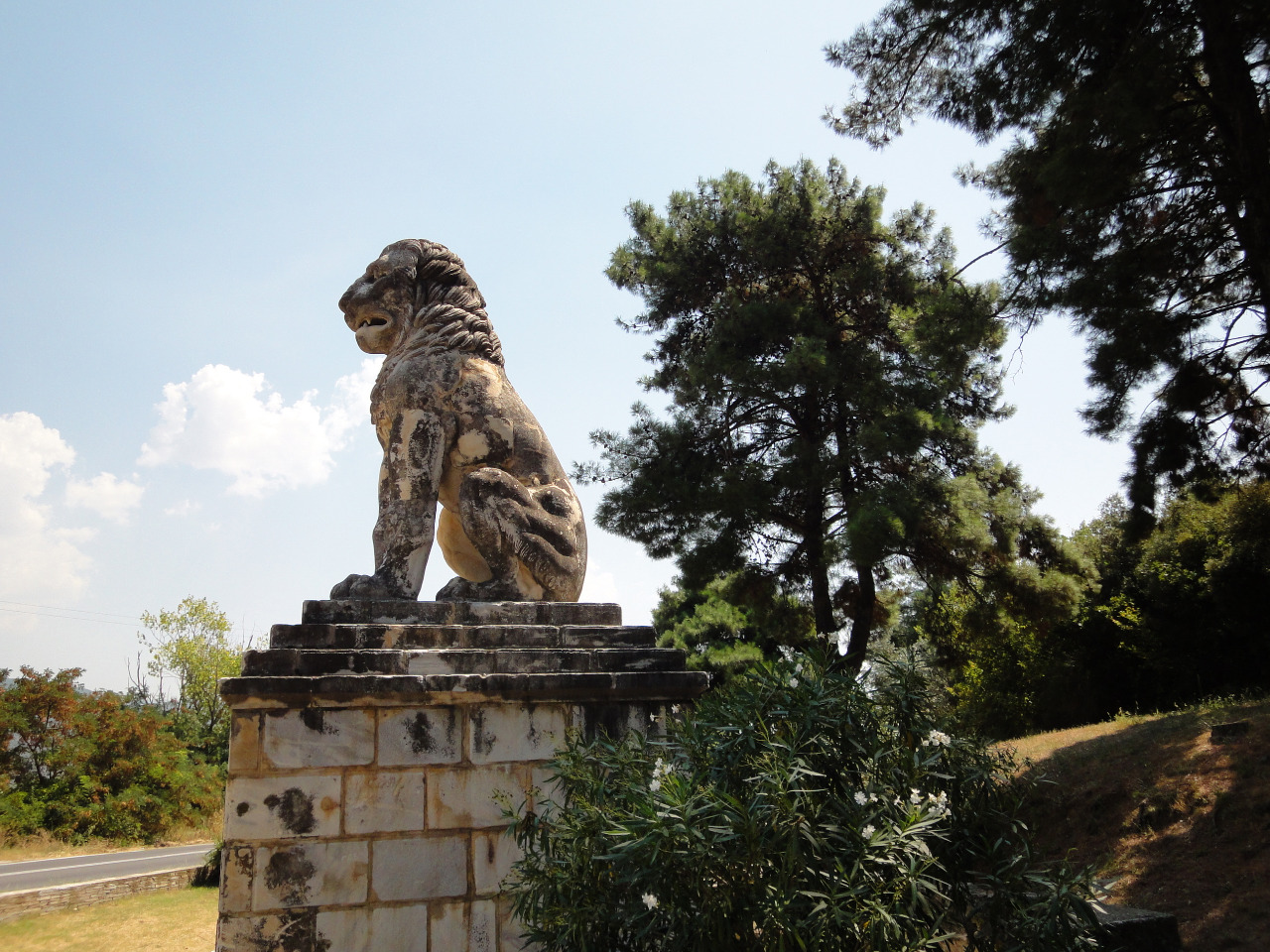 Recent findings Amphipolis turned heads around the world in archaeological site, but also in Greek history in general. On the occasion of this intense global interest, we would like to add one more page beside the large number of the relative pages, highlighting what impressed us the most. The information and photographs used are mainly from other web pages.

During the First Balkan War, the Greek soldiers of Division I and III, noted the existence of marbles into the bushes on the west bank of the river Strymon. In 1913, excavations were made by Greek archaeologists, bringing to light marble pieces, subsequently recognized to be parts of the large marble lion. Later, during the execution of works by drying the Struma company Monx-Gioulen revealed at the mouth of the river bridge and ancient ruins found in the mud of the river huge pieces of marble lion Thanks to the initiative of the Ambassador of the USA in Athens Lincoln MacVeagh, the private initiative and additional aid to the Greek state, restored the Lion of Amphipolis.

In many been tombstones, votive reliefs and statues, and even gold jewelry in various tombs. Also found many vases that show intense commercial traffic. Apart from the earliest discoveries, parts of the ancient walls and the temple of the muse Clio rescued also houses parts of the Hellenistic and Roman periods. Many findings are exhibited in the Archaeological Museum of Amphipolis.

"Kastas Tomb" is called a hill in the ancient Amphipolis in East Macedonia on the river Strymon, beneath which was buried tomb sizeable period 325-300 BC. It is located 800-900 meters southeast of the New Mesolakkia village. In this position had been excavations in the mid-20th century. The monument began to be excavated again in 2012, but became known to the general public in the summer of 2014. It has a circular enclosure with perimeter 497 meters and an area of ​​approximately 20 acres. The excavations are being continued and archeologists have access to the monument from the entrance. They have been discovered four chambers so far.

The entrance is located below the ground surface. The exterior has mosaic flooring with white pebbles, gated rectangular and square shapes of black pebbles. The floor is framed in the lower level of the side walls with blue tape (skirting). Access is from the tomb door opening, 1.67 meters high, on which, on the lintel, they mount two sphinxes found headless. The sphinxes have (without the head) height 1.45 m. Archaeologists estimate that had total height of about 2 m. Just behind the door was the first septal wall, whose purpose was to prevent access.

The second compartment is behind the second septal wall and entrance are the columns with the Caryatids. The second chamber is elevated in the first stop of 7 m. Difference covered with a low step height below the Caryatids, stained with blue color of the vertical part. The second chamber had been nearly filled with soil, as the first. Findings of the archaeologists was that the earth had been left from the manufacturers of the tomb to prevent the looting. The walls of the second chamber have marble coating. The roof is arched and was found in good condition. Its height is about 6 feet, is 4.5 meters wide and 3 meters long. On the second floor of the chamber was a mosaic depicting a chariot with two white horses leading crowned bearded man, accompanied by a red haired woman, probably Persephone. Next to the horses running the psychopomp Hermes holding caduceus, a winged sandals, wearing petasos and mantle. In the background of the second chamber was the third septal wall. The third input is a simple marble lintel Ionic. In the lower part there is the marble threshold that has been decorated Ionic molding.

The third chamber had been less filled than the other two. The walls have marble coating, as in the other two chambers. The vaulted found with several cracks but also stress on the walls. Unlike other stores that have a rectangular cross section, the third chamber is square, measuring 4,5 m x 4,5 m. Deep in the third chamber is a marble doorway opening 1,50 m., which leads to the fourth chamber . Note that the fourth doorway is located in the center of the wall, in a position of symmetry, and a different height (much lower) than the previous doorways. The rotor has a doorway on the left and the marble door with carved imitation metal nails. The marble door was broken and the parts were recovered from the fill. In front of the doorway found metal (copper and iron) nails.

The sides of the fourth chamber are covered with Thassos marble, too.

Amphipolis was an ancient city built in eastern Macedonia, near the river Strymon, on the city formerly known as "Nine Streets" or very close to it. Amphipolis was founded by the Athenians in 437 BC to control the mines of Thrace, but passed to the Spartans during the first phase of the Peloponnesian War, the period 431-421 BC. The Peace of Nicias in 422 BC provided the Athenians attributed to Amphipolis, a promise did not materialize. Then Amphipolis remained under the influence of the Spartans. A last attempt for recovery by the Athenians in 358 BC failed and the next year was occupied by Philip, father of Alexander the Great and became part of the Kingdom of Macedon. After the fall of the Macedonian Kingdom from the Romans, Amphipolis became part of the Roman Empire. Through the city passed the famous Via Egnatia. In the Late Roman years had a significant economic development and something that testify impressive in size and decorated churches of the 5th and 6th century AD. After the invasions of the Slavs in the late 6th century AD Amphipolis gradually depopulated and was  completely abandoned in the 8th century, when most of the inhabitants fled to the nearby seaside town Ioni, which had been renamed by the Byzantines in Chrysopolis. Amphipolis belongs to the prefecture of Serres and is situated very close to Mount Paggaio, where in ancient times Philip II had the gold mines, where were the cuts of currencies to gold mining.